Difference between revisions of "Analytical data visualizations at ICC 2017"

To proceed with the next part, we will export the cumulative viewshed as PNG in order for Blender to use it.

In the following exercise we will visualize the viewsheds along the road (we computed above) as an animation. We will use GRASS GIS Animation Tool. Start it from menu File - Animation Tool: 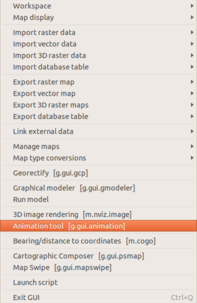 Animation tool in the main menu

Next we want to add orthophoto as base layer. Use Add raster map layer and select raster ortho.

Do the same for the road vector umstead_drive, just instead of raster, add vector. Then rearrange the layers so that the ortho is below all other layers. Confirm the dialog and the animation should be loaded.

Software should be pre-installed, but the following instructions can be used to install software on participants' laptops.