This section of the tutorial is intended to provide new users with an introduction to raster data management in GRASS GIS. As with other parts of the GRASS 6 tutorial, the examples are largely based on the GRASS 5.7 tutorial as well as the GRASS GIS presentation at Geostat-2012. The aim is to present the reader with introductory information on handling raster data within GRASS GIS. 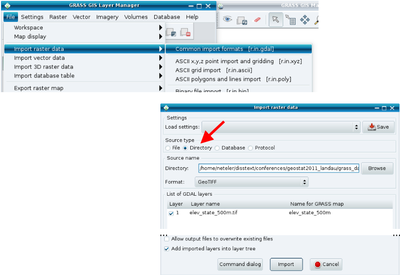 Sometimes, you need to define the region of the Mapset to the extent of your raster. For instance, using the above-mentioned example, you would simply:

Note - that when you run r.in.gdal, the full extent of the map is imported