An open group of people contributing or interested in contributing to GRASS GIS occasionally meet at the cottage of Martin Landa located in the north-west part of the Czech Republic in the village called Solany. 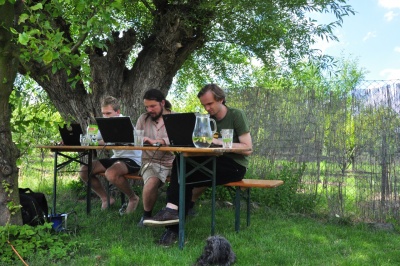 Martin, Stepan, Matej and Gulliver working on GRASS GIS in the summer 2014
Retrieved from "https://grasswiki.osgeo.org/w/index.php?title=GRASS_GIS_contributors_meetings_in_Solany&oldid=22186"
Category: