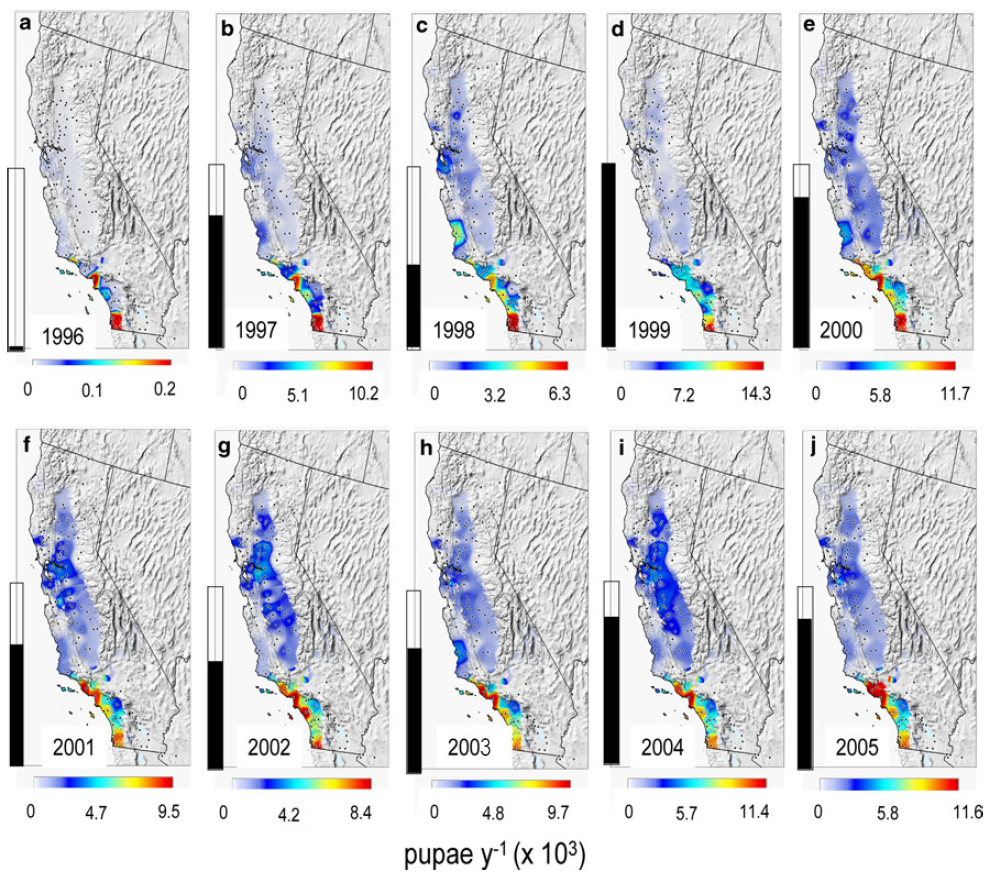 Native to Australia, LBAM was first found in California in 2006 and has thereafter spread to coastal areas of the state causing no economic damage. In 2007, however, a controversial program of aerial sprays was begun over urban and suburban areas to eradicate LBAM based on its predicted wide geographic range (including much of Arizona and California and the southern half of the US; link to USDA map?) and consequent economic losses estimated by the United States Department of Agriculture (USDA). The predictions of our mechanistic model differ markedly from those made by USDA using on a simple degree-day accumulation model, and show that the potential distribution of LBAM in California is, as observed, largely restricted to near coastal areas (Fig. 2). 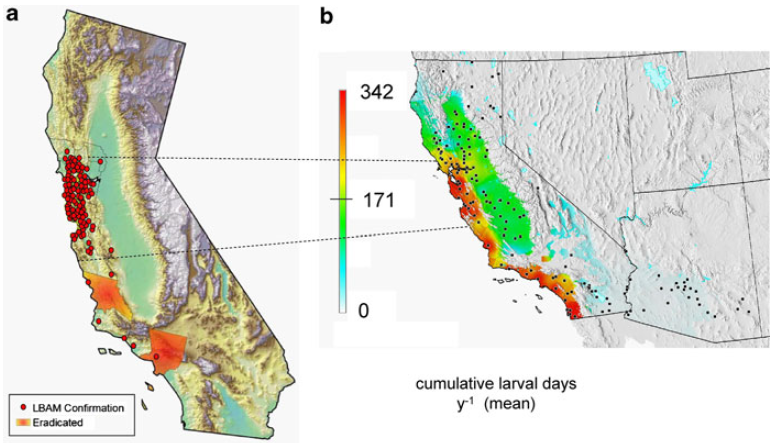 The GlobalChangeBiology project is a Marie Curie International Reintegration Grant (funded by the Seventh Framework Program of the European Union) that was awarded to Luigi Ponti and hosted by the AGRI technical unit of ENEA http://utagri.enea.it/ (ENEA is the Italian national agency for new technologies, energy and sustainable economic development) led by Dr. Massimo Iannetta. The project involved collaboration with Prof. Andrew Paul Gutierrez (Professor Emeritus at the at the University of California, Berkeley and CEO of the non profit organization CASAS Global http://cnr.berkeley.edu/casas/) and Dr. Markus Neteler (Head of GIS and Remote Sensing unit at Fondazione Edmund Mach – Centro Ricerca e Innovazione http://gis.cri.fmach.it/). Thanks to the GlobalChangeBiology project, ENEA now deploys an ecosystem modeling/GIS tool that was not available in Europe prior to the project and can be harnessed to devise scientifically-sound response strategies to global change in agriculture including the increasing problem of invasive species. GRASS is also helping the GlobalChangeBiology project establish a direct link between agroecosystem analysis and remote sensing data so as to bridge the gap between bottom-up and top-down GIS approaches for assessing on-ground ecosystem-level problems such as invasive species. Last but not least, GRASS comes with incredibly strong community support, and this allowed the development of the GRASS-based GIS used in this project to benefit from authoritative hints and insight provided by top-level professionals working in universities, governmental agencies, and commercial settings worldwide. This was critical especially in the initial phase of migrating GIS functionality from proprietary software to GRASS.