Major achievements have been done! See below for an incomplete list... 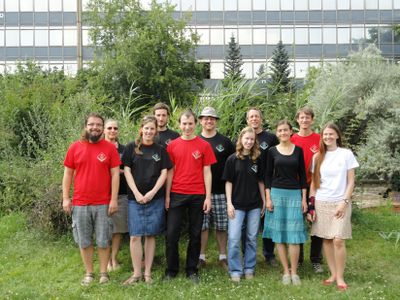 Options to discuss with Sprint participants

Q: do you have to be signed up with a Google+ social media account?

in theory no, but in practice they strongly funnel you that way

Q: is Jitsi on a desktop computer compatible with G+?

at the text chat level, yes. video and voice via Google Talk, reported to work with Voice, not sure about video
It is compatible with GoogleTalk instant messaging (and most other instant messaging including the XMPP RFC like Facebook; Skype is the notable one that it doesn't work with), not sure about GoogleTalk's voice calls, I'd give that a 80% chance of working.
An interesting side-project Jisti offers its own work-alike free multi-person video chat for XMPP(Jabber compatibles) which is not limited to 10 people: VideoBridge. Given enough bandwidth and a modern desktop CPU acting as the bridge server, you can have someone in a G+ hangout share their desktop to pass through the other members of the video hangout.
Also there's a functional alpha-release Android client.
For Jitsi <-> Jitsi video you may need a valid XMPP account. Many (federated in a single grid) providers for that, so it doesn't matter much who. Jitsi run a simple registry at http://jit.si
All quite interesting possibilities and the development is quite active -- but is it there yet? I'm not sure, probably a not far away "almost"; if so, perhaps we could run the bridge on Adhoc for a few days (can run as an unprivileged user, needs Java 6, chat "host" user needs shell access to set magic pass word and get the assigned port numbers to plug into their client), or perhaps host it at fsv.cvut.cz? (i.e. locate it at the shortest hop to max number of participants using it) --HB