Difference between revisions of "Tools for Python programming"

To help with finding broken code, unused variables and other problems, there are several tools available. Described tools are free and open source and usually widely available in GNU/Linux distribution repositories or through pip. They can be connected to some code editor or run separately from command line. Some editors integrate some of these tools. Generally, all tools need to be run from a GRASS session.

pep8 for checking of style

Checks the basic correctness and style of Python code according to PEP 8 -- Style Guide for Python Code.

Pylint is a tool for static source code analysis. It provides wide range of analysis and is highly customizable. It is integrated to some Python editors.

cProfile is a Python profiling tool. It can be used directly in your Python source code or from the command line. The output can be processed by the gprof2dot tool which generates call graph in dot (depends on Graphviz is necessary to render the graph).

For Ubuntu, Graphviz and cProfile are available in repository (graphviz and python-profiler packages). gprof2dot tool needs to be installed through pip (sudo pip install gprof2dot).

Needs to run in distribution directory.

Note that it shows only import and usage dependencies. Because of the Python dynamic typing it is not possible to find dependency on particular object interface when the object is not created but only passed to a function or object constructor.

PyCharm is a editor, or better to say IDE, for Python with large number of tools integrated into it. To get better results, you should run PyCharm within a GRASS GIS session.

GRASS 7.9 comes on MS Windows with a new BAT initialization 'python-grass79.bat' file which can be used for setting up the PyCharm environment.

Spyder is a editor, or better to say IDE, for Python with large number of tools integrated into it. To get better results, you should run Spyder within a GRASS GIS session. It has an integrated pylint tool to verify the source code instantly for undefined or unused variables, wrong indentation and more.

Important: Change the editor settings from 'tab' to '4 spaces' (according to the style guide at https://trac.osgeo.org/grass/wiki/Submitting/Python):

An ideal way how to run Spyder within a GRASS session ('.' can by replaced by any directory):

"Eric is a full featured Python and Ruby editor and IDE, written in python": 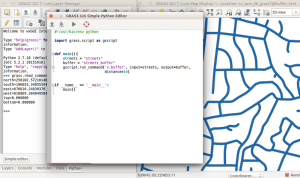 Since GRASS GIS 7.2, there is an embedded editor for Python in GRASS GIS with basic set of editing features. It is aimed towards beginners and contains examples and templates. User scripts and newly developed GRASS GIS modules can be executed in the (command) Console tab directly from the editor.