Interactive variogram fit is available! (r38714 or higher) In gstat tab, the button labeled "Plot/refresh variogram" calls up a R graphics window with the data variogram and the fitted curve. Play with options to obtain the best fit, refresh plot, and when the model fits the data, run kriging! 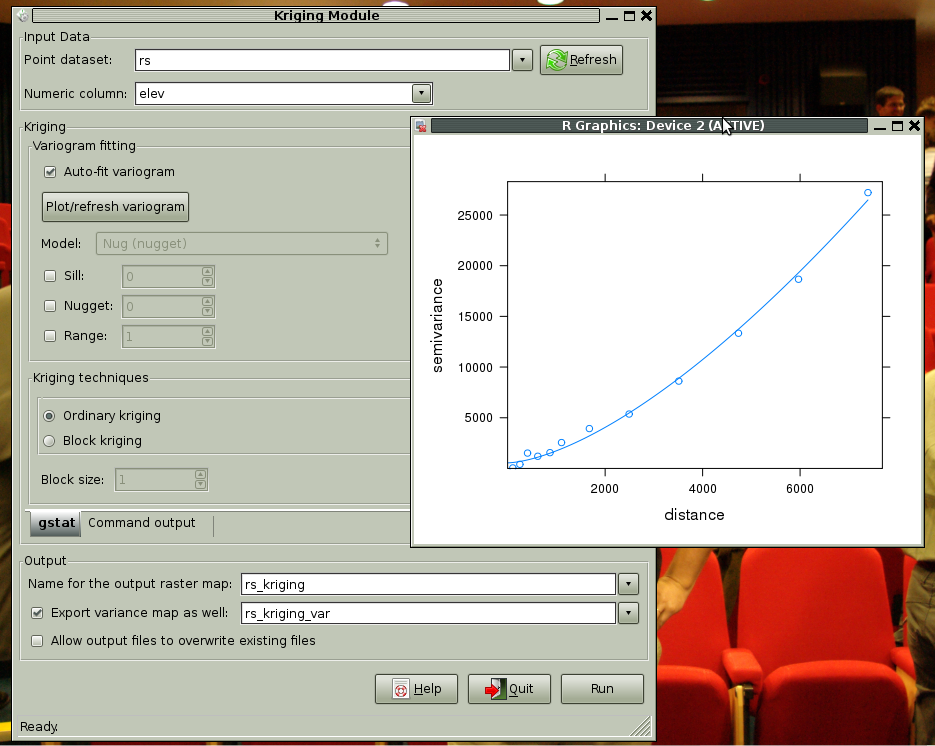 To install v.krige.py, please refer to Compile_and_Install#Scripts. It is easier to install it via g.extension (for GRASS 6.4 it is an AddOn, from 6.5+/7 onwards included). Simply type in a GRASS shell:

this weekly report will be very short, as yesterday I sent this email (Report 2.5, see above) and made little progress.

Next week I plan to set up interactive variogram using matplotlib functions and get the stabler code possible for feature freeze.

this week I worked on error handling by GUI, adding controls on input data and parameters and hiding Run and Plot buttons unless all options are suitable. Variogram plotting is on its way - I discarded matplotlib to avoid further dependencies, in favour of wx.lib.plot.

this is last SoC report - bringing variogram plotting into v.krige! After a long time searching for the lightest and cleanest implementation, R plotting raised as the best solution. On user demand, a R graphics window plots variogram and refreshes it, without interfering with wxGUI. Documentation includes a full example using Spearfish dataset and all informations about dependencies.

Many thanks to all who have helped me writing v.krige: GRASS and R developers, OSGeo SoC crew, wise friends, all testers. I hope this module will attract people towards GRASS and R, and provide a valid alternative to closed-source kriging tools.