Difference between revisions of "Wx.stream GSoC 2011"

The module is currently on maintenance

In GRASS GIS new modules suitable for hydrological analysis have been developed, namely r.stream*. My idea is to develop a wxpython GUI (see wxGUI) for r.stream* that allows to see the preview of the hydrological analysis over a part of a map and then decide if apply the analysis or not. It will include "multiple previews". Every result can be saved as an image and set of parameters for future use in additional "preview windows", next choose from group of possible parameters that which is most suitable.

I thought to add in Map display a button that allows to select a point on the DEM that will be the center of the preview. So the region is determined by the script and not by the user. This can avoid the warning message for the user if the region selected is too big.

Selecting the point on DEM raises a window with different tabs. Each tab corresponds to a r.stream command. In each tab there are text boxes in which user inserts parameters required to run the command. Below them, there are the following buttons:

Please feel free to discuss and comment my idea. 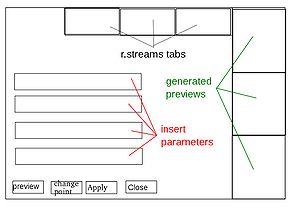 I thought hydrological analysis by GUI has to be organized in two steps:

IMHO this previous step is necessary in order to generate the preview fastly and also because stream extraction preview needs the accumulation map generated on the whole area and not only on the small region selected (stream network may vary). The "hello world" of this first step GUI is available on my brand new github repository [0] 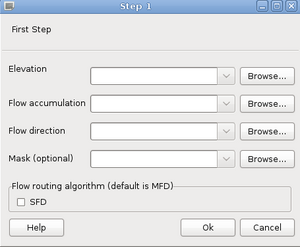 Inputs of the first tab are:

If user chooses "custom", the name of the map in accum field is the name of existing map which will be used. If map is generated, the name in the field is the name of the new map which will be created. The choice will be done by a dropdown list. The field could be labeled as "Use existing accum map or create a new one using r.watershed". Of course, there will be fields to write the names of results maps. There will be checkboxes to choose which layers will be generated, let's say: network, ordered network, ecc.

About preview area: user should select a point on the DEM and push the "update" button. A preview is generated according to parameters inserted by user. The extents of the small area are pre-established (I will establish them on the basis of the computing time, after testing)

Second tab uses results of tab 1 if user wants to continue his/her work on segmentation on the basis of results of network modeling.

The purpose of this GUI is to allow user to access at hydrological modeling in GRASS 7 in a intuitive way. It is a GUI for the r.stream modules R.stream.*, implemented by Jarek Jasiewicz and Markus Metz. These modules perform stream extraction, ordering (Strahler's order, Horton's original order, Shreve's magnitude, Hack's or Gravelius' stream hierarchy), basin delineation according to user's rules, distance to streams, distance above stream, distance to outlet (width function), etc.. As a further development,in the GUI will be also implemented a module to extract automatically the "optimal" threshold for channel initialization [1] and another one to generate the main morphometric parameters of the basin (that is currently only available for GRASS 6.5 [2]).

The GUI is organized in modular way and the first implementation is for stream extraction. The parameters are: 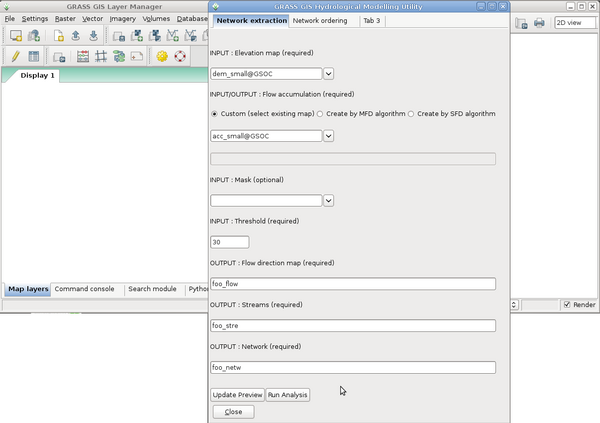 Once filled the fields, user can choose either to run immediately the analysis, pushing the "Run" button, or to see the result of the analysis on a small part of the region, pushing the "Update Preview" button. This latter raises a message asking user to select the centre of the preview on the canvas. 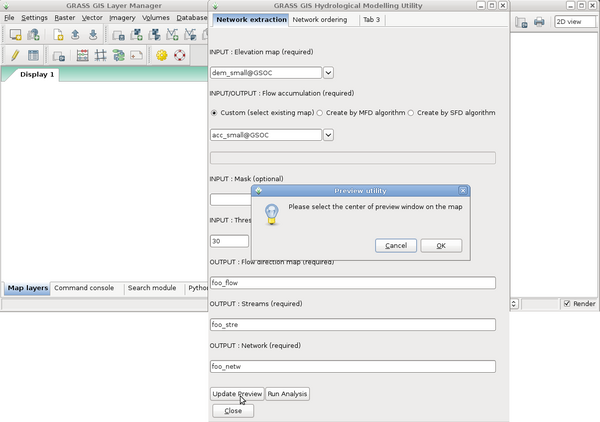 The OK button raises a new canvas, on which is possible to select the coordinates. The button "Get coordinates" switches the control on the canvas and wait for a mouse click. After that, coordinates are shown on the widget. 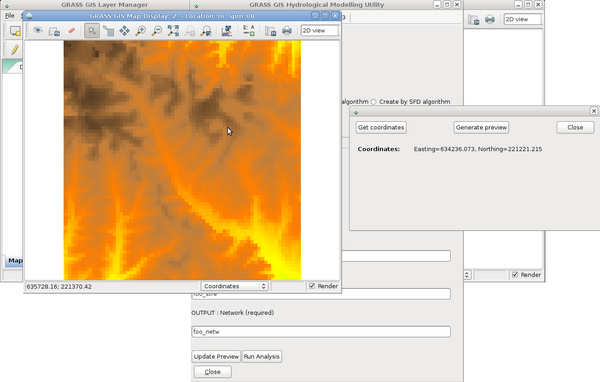 When selection is done, the "Preview" button raises an image slider on which the preview is shown. The preview represents the result of the stream extraction analysis. If user wants to generate more previews, they are added at the image slider. 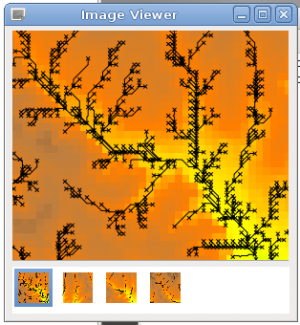 Compile them, then run: