Difference between revisions of "Computational region"

The current region or computational region is the actual setting of the region boundaries and the actual raster resolution.

As a general rule in GRASS:

Hint for users migrating from other software packages:
The current region or computational region can be considered as region of interest (ROI).

Understanding the impact of region settings

It is important to understand the impact of the region settings, notably of resolution, on raster analyses. Both during reprojection from one coordinate system to another, but also for calculating raster statistics with modules such as r.univar or v.rast.stats, the values of your raster pixels can be modified depending on your region settings and thus modify the results of any analysis.

If a raster map has an original resolution that is different from the resolution of the current computational region, but also when the current computational region's cells are shifted in space compared to the original raster map, the values are resampled on-the-fly by GRASS GIS, using the nearest neighbor method (see some of the details in the Raster introduction manual.

In order to get the original total, you will have to do other types of resampling, notably using r.resamp.stats or possibly r.resamp.interp. For example (still using the 9x9 region):

Or, to assign values depending on the share of each original cell falling into the region's cell:

For more details about the interpolation methods, see Interpolation and the Raster introduction manual.

Q: I don't see anything! 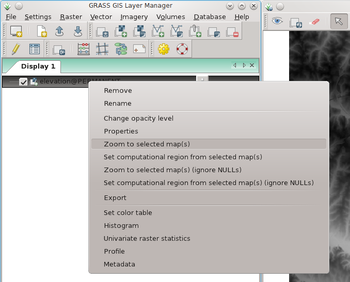 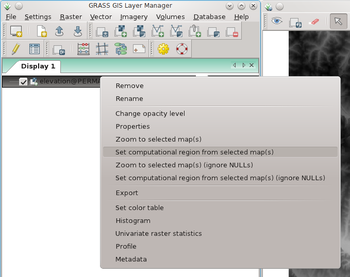 Q: The resolution of my region is not the one I asked for!

To force the computational region to match the resolution entered, you need to use the -a flag:

A: You likely try to use more memory than your computer offers which is commonly caused by a too high raster resolution (or too large computational region). E.g., it is pointless to calculate common DEM data at nanometer raster resolution. Set the region extent and raster resolution properly with g.region (in the wxGUI: menu Settings -> Region -> Display Region | Set Region).

Q: I want to subset a raster map!

A: While this is done on the fly by setting the computational region properly, you can still create a subset raster map copy with