New world Screw-worm Cochliomyia hominivorax (NWS) is a well known agricultural pest in South and North America, causing extensive damage to cattle. The females lay larvae into small wounds in the animal's skin and the larvae then burrow into the tissue and cause myasis, which weakens the animal, lowers production, and sometimes is severe enough to lead to death of the animal. The "cousin" of NWS, the Old World Screw-worm Chrysomya bezziana (OWS) causes similar effects in cattle and also small ruminants throughout the Middle East and South East Asia.

Typically these pests are treated by spraying the livestock directly with pesticides. However they are an ideal candidate for treatment by Sterile Insect Technique (SIT) in the context of an Area-Wide pest management program. See the Joint FAO/IAEA program. An SIT based program requires releasing huge numbers of sterilized male flies throughout the grazing lands, so that the female flies do not encounter a wild male, thus leading to a substantial reduction in the population within a few generations. The method is cost effective when the treated area actually is infested or potentially can be infested with screw-worm. So a successful SIT treatment plan depends on a good understanding of the distribution and possible migration of the pest. This research attempts to address that very question. By merging population genetics and a species habitat model through the use of GIS tools, a procedure is suggested which leads to a geographic data layer representing possible migration corridors of the insect. These corridors are created by combining genetic distance data with environmental data using GRASS GIS.

In this research, individuals were collected from 38 locations throughout S. America, and mtDNA analysis isolated over 200 haplotypes. The haplotypes where grouped into four "geographic groups". A pairwise Fst matrix was created indicating the genetic distance between samples from all pairs of locations. This procedure is fully described in Fresia et al. 2011. (Full text availble on request). From the Fst matrix, those pairs with Fst=0 (genetically identical samples) were isolated for further work.

The presence only algorithm employed by MaxEnt ( software for species habitat modeling ) was used to create a Habitat Suitability Model (HSM). Environmental predictors were chosen from the BioCLIM data, as well as elevation, landcover (the glc2000 dataset ) and livestock density from the FAO Gridded Livestock of the World data layer. The resulting raster showed probabilities for spread of the NWS based on environmental conditions. 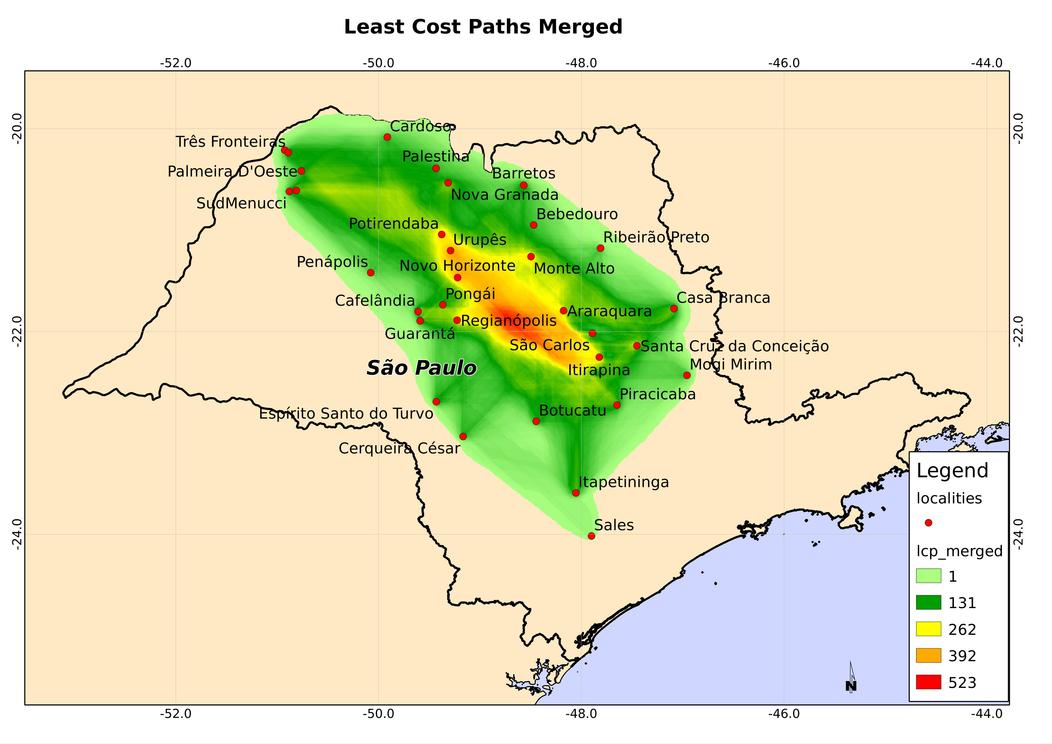