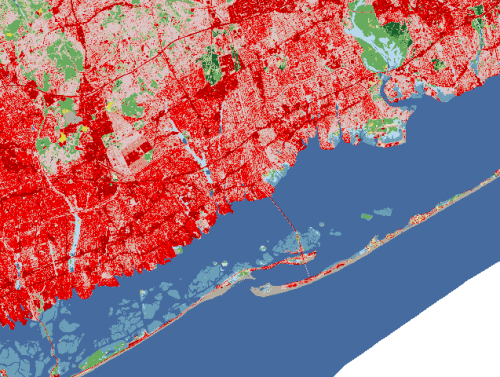 National Land Cover Data Set NLCD, U.S. Geological Survey (USGS)
The NLCD was compiled from Landsat TM imagery (circa 1992) with a spatial resolution of 30 meters supplemented by various ancillary data (where available). The satellite images were analyzed and interpreted by using very large, sometimes multi-State, image mosaics (that is, up to 18 Landsat scenes). Because a relatively small number of aerial photographs were necessarily conducted from a broad spatial perspective. Furthermore, the accuracy assessments correspond to Federal Regions, which are groupings of contiguous States. Thus, the reliability of the data is greatest at the State or multi-State level. The statistical accuracy of the data is known only for the region.

Obtaining data from the USGS

The classic Spearfish GRASS sample dataset contains a landcover.30m raster map which is an excerpt from an older version of the NLCD dataset.

this can also be done automatically with the Location Wizard using the downloaded .img file.

Here are the values for the CONUS dataset:

Rather than import the entire 16GB raster image, just make a virtual link to it:

Then use g.region to zoom to your area of interest and r.mapcalc to extract a subset

These can be applied with the r.category module. 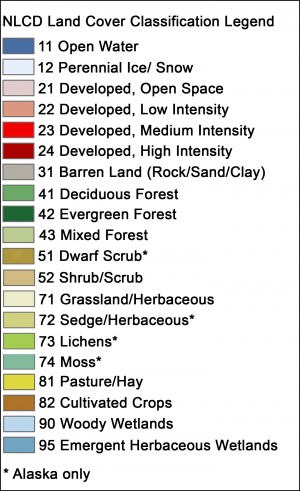 These should load in automatically, but if they don't here are the official colors which you can load in with the r.colors module's rules= option:

Use the -n and -c flags of d.legend to limit the legend to named categories.

For using as a basis for Mannings n friction coefficients, you can make a virtual reclass map with r.reclass. The module will only reclass as integers so the table below is reclassed into parts per ten-thousand. Crop your area of interest with r.mapcalc and divide by 10000.0 at the same time to get the Manning's n number.

Actual values for your location will vary widely, the following is simply a starting point.