Learn about scripting, graphical and tangible (!) interfaces for GRASS GIS, the powerful desktop GIS and geoprocessing backend. We will start with the Python interface and finish with Tangible Landscape, a new tangible interface for GRASS GIS (see a webinar video). Python is the primary scripting language for GRASS GIS. We will demonstrate how to use Python to automate your geoprocessing workflows with GRASS GIS modules and develop custom algorithms using a Pythonic interface to access low level GRASS GIS library functions. We will also review several tips and tricks for parallelization. Tangible Landscape is an example of how the GRASS GIS Python API can be used to build new, cutting edge tools and advanced applications. Tangible Landscape is a collaborative 3D sketching tool which couples a 3D scanner, a projector and a physical 3D model with GRASS GIS. The workshop will be a truly hands-on experience – you will play with Tangible Landscape, using your hands to shape a sand model and drive geospatial processes.

You need to create a GRASS database we will use for the tutorial. Please download the dataset for the workshop, noting where the files are located on your local directory. Now, create (unless you already have it) a directory named grassdata (GRASS database) in your home folder (or Documents), unzip the downloaded data into this directory. You should now have a Location nc_spm_08_grass7 in grassdata. Start GRASS GIS in Mapset user1. 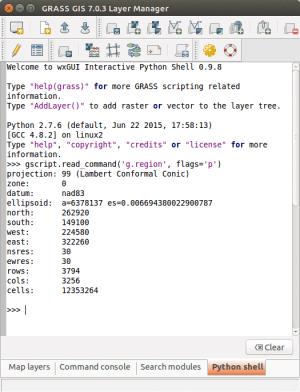 We will use GRASS GUI Python Shell to run the commands. For longer scripts, you can create a text file, save it into your current working directory and run it with python myscript.py from the GUI command console or terminal.

The run_command() function is the most commonly used one. Here, we apply the focal operation average (r.neighbors) to smooth the elevation raster layer. Note that the syntax is similar to bash syntax, just the flags are specified in a parameter.

Textual output from modules can be captured using the read_command() function.

Certain modules can produce output in key-value format which is enabled by the -g flag. The parse_command() function automatically parses this output and returns a dictionary. In this example, we call g.proj to display the projection parameters of the actual location.

For comparison, below is the same example, but using the read_command() function.

Certain modules require the text input be in a file or provided as standard input. Using the write_command() function we can conveniently pass the string to the module. Here, we are creating a new vector with one point with v.in.ascii. Note that stdin parameter is not used as a module parameter, but its content is passed as standard input to the subprocess.

Some modules have wrapper functions to simplify frequent tasks. For example we can obtain the information about a raster layer with raster_info which is a wrapper of r.info, or a vector layer with script.vector.vector_info().

Another example is using script.raster.mapcalc() for raster algebra:

Function script.core.region() is a convenient way to retrieve the current region settings (i.e., computational region). It returns a dictionary with values converted to appropriate types (floats and ints).

We can list data stored in a GRASS GIS location with g.list wrappers. With script.core.list_grouped(), the map layers are grouped by mapsets (in this example, raster layers):

Here is an example of a different g.list wrapper script.core.list_pairs() which structures the output as list of pairs (name, mapset). We obtain current mapset with g.gisenv wrapper.

Export all raster layers from your mapset with a name prefix "elev_*" as GeoTiff (see r.out.gdal). Don't forget to set the current region (g.region) for each map in order to match the individual exported raster layer extents and resolutions since they may differ from each other.

Standard scripting with GRASS modules in Python may sometime seem discouraging especially when you have to do conceptually simple things like: iterate over vector features or raster rows/columns. Using the C API (most of GRASS GIS is written in C), all this is much more simple since you can directly work on GRASS GIS data and do just what you need to do. However, you perhaps want to stick to Python. Here, the PyGRASS library introduced several objects that allow to interact directly with the data using the underlying C API of GRASS GIS.

Create an instance of a vector map:

Open the map in write mode:

Add the above two points to the new vector map:

Now do the same thing using the context manager syntax and set also the attribute table:

Note: we don't need to close the vector map because it is already closed by the context manager.

Open the existing raster in read mode and print first 5 values of the first row (indices from S to N):

Create a new raster and write value 1 for cells with elevation < 120 and 0 otherwise:

For more examples of using PyGRASS, please look at How to write a Python GRASS GIS 7 addon workshop from FOSS4G-Europe 2015 and additional tutorials can be found on a PyGRASS wiki page. 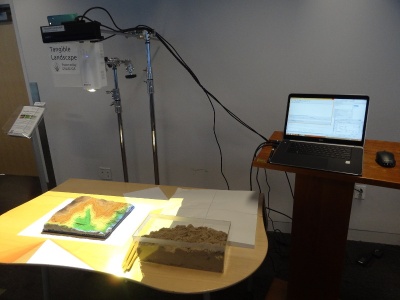 A brief introduction to Tangible Landscape

Tangible Landscape is a collaborative modeling environment for analysis of terrain changes. We couple a scanner, projector and a physical 3D model with GRASS GIS. We can analyze the impact of terrain changes by capturing the changes on the model, bringing them into the GIS, performing desired analysis or simulation and projecting the results back on the model in real-time. Tangible Landscape, as an easy-to-use 3D sketching tool, enables rapid design and scenarios testing for people with different backgrounds and computer knowledge, as well as support for decision-making process.

Tangible Landscape has been used for a variety of applications supported by the extensive set of geospatial analysis and modeling tools available in GRASS GIS. We have explored how dune breaches affect the extent of coastal flooding, the impact of different building configurations on cast shadows and solar energy potential, and the effectiveness of various landscape designs for controlling runoff and erosion. Have a look at our [tangible-landscape.github.io/ website], book, and Youtube channel.

The software is free and open source and you can download it and use it in your own setup of Tangible Landscape.

We will use a repository on GitHub to collect code samples participants and then run them in Tangible Landscape environment (we used this Titanpad during the workshop and codeshare in one class). Whenever a scanning cycle is complete, a specified Python file is imported and all analyses in that file are computed. Analyses are organized into functions with defined interface - each function has to start with run_. Input parameter scanned_elev is the scanned raster (our DEM) and env is the environment which needs to be passed to individual subprocesses to correctly handle the region of the analysis.

Since participants will develop and test the analyses on their computers before we apply them to Tangible Landscape, we add here the 'main' function with predefined parameters and participants will run it as a script.

We will run the scripts from Simple Python Editor (Python tab -> Simple editor). Alternatively, scripts can be run from terminal or GUI command console:

On Windows the path will look differently, for example:

Make sure you set computational region to match your DEM. We will use raster DEM elev_lid792_1m from the sample dataset.

Here follow some basic examples of geospatial analyses we can do with Tangible Landscape. At the end of this section you can find additional tasks, some of them combining multiple analyses. 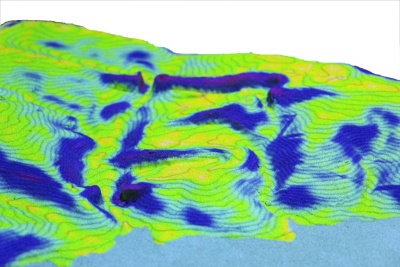 Basic example how we can compute topographic slope in degrees:

We can compute slope in percent and reclassify the values into discrete intervals:

Change window size and see how it influences the result.

There are 2 different methods for landform (ridge, valley, ...) identification in GRASS GIS. First one is implemented in r.param.scale and uses curvatures. The second is implemented in an addon r.geomorphon which uses multiscale line-of-sight approach. This addon can be installed from GUI command line:

Building model based on difference raster

When building a model by hands based on a defined DEM, we can compute the difference between the scanned model and the original DEM. By color-coding the difference, we can see where to add sand or remove it.

If you are running this outside of Tangible Landscape, you can generate a raster (our hypothetical pile of sand) and compute the difference. In this example we also vertically rescale and translate the scanned raster to match the original DEM using r.regression.line. 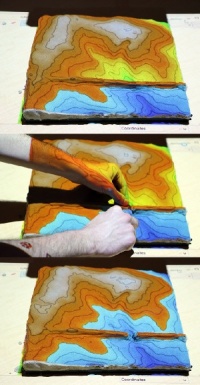 Module r.lake fills a lake to a target water level from a given start point or seed raster. The resulting raster map contains cells with values representing lake depth and NULL for all other cells beyond the lake.

Create a lake where water level is relative to the altitude of the seed cell. Use function script.raster.raster_what() to obtain the elevation value of the DEM and create a lake with water level being for example 5 m higher.

We can derive watersheds and flow accumulation using module r.watershed in one command:

Compute average slope value for each watershed. To do that use zonal statistics using r.stats.zonal:

We will first compute solar irradiation (daily radiation sum in Wh/m2.day) for a given day using r.sun:

Then we can also compute solar irradiance (W/m2) for a given day and hour (in local solar time) and extract the shades cast by topography:

First example shows computing viewshed (visibility) from a given coordinate: 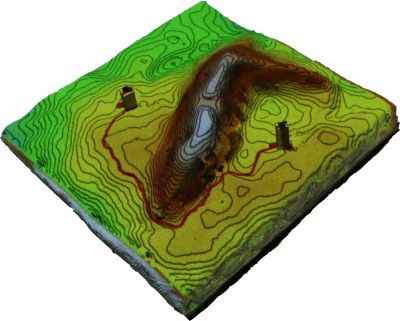 This example shows least cost path analysis with slope as cost. Coordinates will be provided by Tangible Landscape. The resulting path will go through flat areas.