Medfly is a serious cosmopolitan pest of East African origins that was first detected in California in 1975, but persistent measurable populations of the pest have not been subsequently found. Yet a large-scale detection/eradication campaign has since been place in the absence of sound knowledge of the fly’s potential invasiveness and geographic distribution. Our analysis suggests that temperatures are unfavorable for medfly in much of California and hence questions the scientific basis for the ongoing eradication program (Fig. 1).

Native to Australia, LBAM was first found in California in 2006 and has thereafter spread to coastal areas of the state causing no economic damage despite its broad host range. In 2007, however, a controversial program of aerial sprays was begun over urban and suburban areas to eradicate LBAM based on its predicted wide geographic range (including much of Arizona and California and the southern half of the US) and consequent economic losses estimated by the United States Department of Agriculture (USDA; see Fowler et al. 2009). The predictions of our mechanistic model differ markedly from those made by USDA using on a simple degree-day accumulation model, and show that the potential distribution of LBAM in California is, as observed, largely restricted to near coastal areas (Fig. 2). Our analysis of LBAM in California contributed to switch the LBAM eradication program to one of containment. 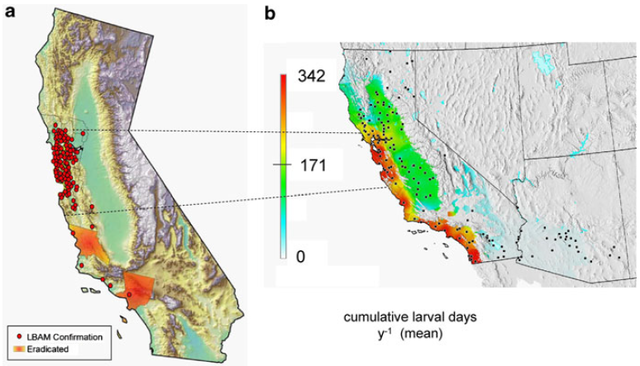