Difference between revisions of "LIDAR"

Point cloud data, as a type of representation of 3D surfaces, are usually produced by airborne or on-ground laser scanning, also known as Light Detection and Ranging (LiDAR). The data are often provided as sets of very dense (x, y, z) points or in a more complex, public file binary format called LAS that may include multiple returns as well as intensities. GRASS GIS supports basic and advanced lidar data processing and analysis.

In this section various modules are introduced.

Due to memory overhead vector point imports will be limited to a few million data points unless topology and database creation is skipped with the -bt flags. It may also be useful to clip the import file to only accept points falling within the current region by using the -r flag. See g.region for details on specifying the region bounds.

Then Compile and Install.

The following scripts are given for UNIX Bourne Shell; MS-Windows users should use the Msys terminal to use them.

Conversion of text files to LAS

(optional: While you do not need to do this conversion for GRASS import, the resulting files are much smaller than the uncompressed text files; additionally, they are in a defined format. On the other hand ASCII text files will survive decades without the need for external software.)

Sample text data such as:

This is similar in form to the above, but use the '-s' scan flag with the r.in.xyz module. Add the '-g' flag to get output ready for g.region.

After creating a suitable UTM zone 17 location (EPSG:32617; the Serpent_Mound is in Ohio, USA) set the region according to the information from lasinfo at 1m resolution, using the '-a' flag to round the grid outwards, aligning to whole meters:

Finally, import with r.in.xyz with data piped directly from the las2txt program and set a nice equalized color table:

This is the same as the above, but use the r.in.lidar module (only in GRASS 7). In all cases you should manually decide on a suitable grid resolution and bounds, then set them with g.region, before running the import modules.

Region setting (establishing the grid) is not needed for vector features so we can go directly to the import step. To deal with millions of input points v.in.ascii should be run with the options to skip creation of an attribute database and building topology as these can consume large amounts of memory. Note that vector maps without topology built are somewhat limited in their ability to be processed. Most LIDAR specific modules have been adapted to not require topology. Even so, after initial cleaning steps it is often more efficient to work with huge datasets in GRASS as raster data.

If topology was built, you can use d.vect's -z flag to colorize by elevation value. Without topology you can still colorize, but you need to use color rules based on absolute elevations, not percentage of scale.

You should now be able to see the serpent: 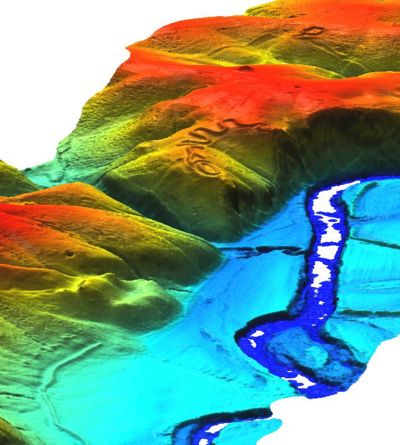 It is possible to show vector points in 3D, but millions of them may make the program run slow. Topology is required (v.build). Tick the "3D" box in the Visualize → Vector points dialog.

This is the reverse of the import step, but using v.out.ascii or r.out.xyz with txt2las. Because the v.out.ascii module exports category number which we are not interested in, we cut it away with the UNIX cut utility.

Scan input file for spatial extent. The -g flag shows the result in a convenient copy-paste format for g.region:

We use this output to set region, predefine 2m raster cells, and polish the odd coordinates with -a:

We compute a raster map representing number of points per cell

Look at the resulting raster map:

Reduce the resolution to 6m to get at least one point per cell:

Overlay other GIS maps to map of mean elevation:

Now we continue to work in a zoomed spatial subset of the area.

Here we only import only points in the rural area, do not build topology, and use the z-coordinate for elevation:

Clear the monitor, then show a black and white orthophoto:

We now use two LiDAR vector point maps, which were prepared earlier:

DEM/DSM separation the simple way by selection of Lidar returns

Background on lidar multiple returns: "Lidar returns are discrete observations* recorded when a laser pulse is intercepted and reflected by targets. Multiple returns derive from one laser pulse intercepting multiple targets (e.g. a top of a tree, its branches, and the ground)." (source: stackexchange).

Find out where we have multiple returns:

TODO: verify order of first and last returns in below text

Buildings/vegetation are generated from detected edges (bug: you may need to specify the mapset):

Correction (this is applied twice):

DEM and DSM are generated:

see above Contour lines to DEM page for further discussion of the (in)appropriateness of using TINs to generate raster surfaces. It is hoped that in future GRASS's more advanced spline interpolation modules will get breakline support.